Scooters aren’t the only new thing Lyft brought to campus this year. Many Ohio State students were surprised this July by the announcement of Ohio State’s new partnership with Lyft rideshare services.

In the official email, representatives from OSU stated that the program is for “eligible students traveling on or around the Columbus campus…[offering] discounted rides, inside the designated service area, from 9 p.m. to 3 a.m.” Ohio State also published that after consulting with Undergraduate Student Government, the new services will be replacing the old Safe Ride program that students have known in the past.

“With the previous system of university-run safe rides in place, students were waiting upwards of a half hour for a ride. Concerns about the long–and therefore dangerous–wait times had been a common grievance among the student body for many years,” said Kate Greer, USG Student Body President.

The logistics of the program as officially published by Ohio State are that the university will contribute $5 to each ride within the given limitations, and riders will be responsible for paying the rest of the charges, which are estimated to be around $2 or possibly less. Ohio State will contribute this discount to the first 10,000 riders each month, with prices returning to their standard fare for the remainder of the month following this limit.

There are a few caveats to the services, such as only a shared ride can be requested. However, only other Ohio State students will be able to book these shared rides.

Greer also stated that “the biggest disadvantage of the Lyft program as it currently stands is that it has replaced a service that was offered free-of-cost to students. the old safe ride program was only utilized by approximately 2% of Ohio State students, but many students are still a bit upset that a free option that was once there has now been taken away.”

It is hard to tell how successful this new program will be at such an early stage, but it is clear that being user-friendly is not an issue. With rideshare apps such as Lyft and Uber being a part of everyday college life, OSU students should have an easier time contacting a ride through the new program than with the old Safe Ride program.

“I believe that partnering with ridesharing apps is the most future-facing model of safe rides at universities. Many universities have piloted this before we even considered it,” said Greer, “However, Ohio State is a really influential school. Our practices in every field are observed by institutions across the country, so it is likely that we will influence several more universities to switch to ridesharing partnerships with third-party companies.”

From personal experience, I think this new program has been great so far. I had my doubts about how quickly the discounted rides would be used up, and how big the coverage area would be. However, the Lyft app provides a map of the included area, which surprisingly extends as south as 5th Ave. and as north as Riverview Dr., well beyond the boundaries of central campus. I took one of the shared Lyfts myself on a recent Saturday night, and was pleasantly surprised with the service. Although taking a shared ride did take a few minutes longer for pick-up than your standard Lyft, the wait times are still incomparably better than those of the previous Safe Ride services. There was another Ohio State student already in the car when I was picked up, so if you can stand a couple minutes of either awkward silence or small talk then you’ll do just fine. Plus, you’ll have a couple extra dollars to spend wherever you’re headed!

As thousands of students flock back to campus for the start of the year, the new services will certainly be put to the test in the coming weeks. Following the first week of class, the app has yet to surpass it’s allotted 10,000 rides for the month. Ohio State representatives and students alike will have their eyes on September, the first full month with campus running at full capacity. I for one have high expectations, and hopefully a wallet that is slightly more full. 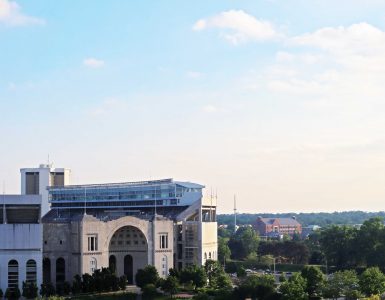 Former Ohio State players Jahsen Wint and Amir Riep were recently indicted on three counts: two for rape and one for felony kidnapping. These indictments stem from a Feb. 4 incident where the two allegedly raped a woman...