Taco Bell is full of surprises. I’m sure we’d all be surprised, to our dismay, if we ever found out what was actually in their taco meat. the day after eating at Taco Bell, I’m always surprised at how many times I have to rush to the toilet. (Worth it every time.) And it’s surprising that they can be such a successful business with absurdly low prices.

Once again, Taco Bell has surprised us all by adding alcohol to their drink menu. My expectations, upon hearing that the Taco Bell Cantina on High Street obtained its liquor license, were very ambivalent. Am I going to walk in and see a full bar with a separate area to order food, a la Plaza? Or are they going for something like Chipotle with bottles of beer and fresh margaritas available to order at the register?

Taco Bell’s drink menu turns out to be a similar, cheaper version of Chipotle’s drink menu. Instead of bottled Coronas and Patron margaritas, Taco Bell offers beers on tap and the option to add rum, vodka, or tequila to your freeze. All of the freeze flavors are available to make alcoholic––including the holy grail of Taco Bell beverages, the Baja Blast.

In keeping with Taco Bell tradition, the prices for the drinks are fairly cheap. You can get a 16-ounce Bud Light for $3, Corona for $4, and Thirsty Dog or Lost Coast for $5. However, the real treat here is the alcoholic freeze, which is only $5. the key to enjoying one of these boozy Baja Blast freezes is to keep mixing it and drink it fast. Otherwise, the alcohol you have mixed in will all go to the bottom.

The numerous televisions on the wall and high-top tables with stools to sit at create an atmosphere that could loosely pass as a casual bar. the real potential of this Taco Bell drink menu lies in its ability to transform your pre-gaming on your way to south bars in the Short North. It’s a great quick stop before the rest of the night. Or, a way to bring it to a close with one last drink.

I’m not so confident that this new drink menu will go well in hours just before the south campus hotspot closes at 4 a.m, but I can only imagine the level of intoxication that will be reached by some individuals. It’s no secret that Taco Bell is caviar to anyone under the influence. As long as the one security guard on duty can handle his own, you can bet we’ll be back for drinks at Taco Bell. 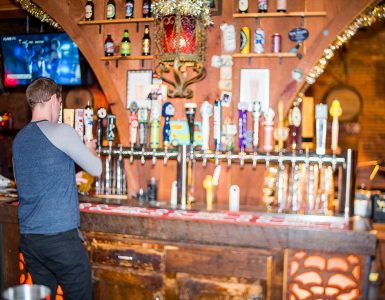 Photos by Grant Jones Bartenders come in all shapes and sizes, and from all walks of life. Who’s to say who is best equipped to give you what you need when you sit down across the bar? Bartenders. Professional...