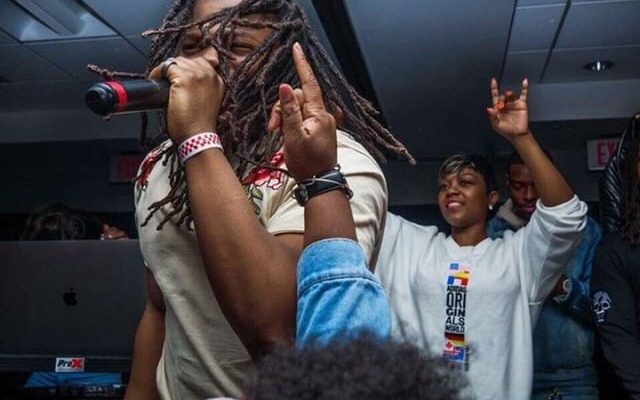 Oxymajors: Because your major doesn’t have to define you

Oxymajor (äksi•meӀ•dӡәr) – Someone whose hobby or skill is completely unrelated to their course of study, but they do it anyways.

Jerome Gordon is a fifth-year student from Columbus studying aeronautical engineering. This rigorous major requires him to take between 15 and 18 credit hours in an average semester. He also has held jobs as a bouncer, server, and student aid at the Ohio Union. Obviously, Gordon has a lot of responsibilities on his plate, but that hasn’t stopped him from making waves in the Columbus hip hop scene producing under the name romenhermind and rapping as Jig Papi Rome. He would freestyle for fun at parties until he started rapping seriously his sophomore year. Now, Gordon is using his engineering studies to bolster his game in hip hop while using his music as a means to relax and escape his schoolwork for a while.

Many people don’t see the correlation as Gordon explains, “I get questioned all the time on why I do engineering if I want a musical career, and it’s frustrating sometimes.”

However, the benefits of challenging himself in his studies have outweighed the frustration as Gordon goes on to say, “I do appreciate my engineering curriculum for teaching me how to think critically. It’s been a powerful tool that lets me problem solve, [so] I can create what I picture or hear in my head.”

This is not to say that it has not been a challenging balancing act as he adds, “Engineering and music require two completely different sides of me, so I’m working on a way to have the best of both worlds. I’m still in the process of balancing the two because I’d rather be rapping or producing when I have to study.”

Despite the difficulties, Gordon says quitting isn’t an option.

“I have a lot emotionally invested in both, so giving up one would be hard. I’m a first-generation college student, so I get a lot of support from my family to finish.”

Support from his family has also shaped his music career, Gordon says. “I grew up in a musical home, so I have a heavy R&B/soul background.” His more direct musical influences are found in Lil Uzi Vert, Lil

Wayne, and Young Thug. Upon graduating, Gordon wants to work for NASA until he finds himself in a good position to work on his music career full-time.

To support his music in the meantime, stream his project Loverboy on Tidal, Spotify, or Apple Music under the artist name romenhermind.

On the Pre-Law Track

Laiqa Shahzad is a fourth-year studying political science on the pre- law track. Anyone can tell you that balancing LSAT studying with classes, an internship, and hobbies can be a challenge. However, Shahzad makes sure to take time out of her studying to pursue other interests. When Shahzad isn’t keeping up with school, work, and extracurriculars, she’s creating amazing looks as a makeup artist.

Shahzad has been into makeup since she was 15 and decided to create a side business only recently.

“I grew up engaging in artistic activities like painting, drawing, and even graphic design. Makeup artistry was another creative avenue for me. I wanted to build my confidence first before becoming a freelance artist, so I would spend hours practicing on myself and my friends.”

Balancing her hobbies and work can be hard, but Shahzad said keeping up with her makeup artistry is a way to keep herself creatively engaged while in school.

“School should definitely come first, but it shouldn’t be the only thing consuming your time.”

Shahzad attempts to fit in as many clients as her schedule allows, but with classes, being on executive boards for student orgs, an internship, and studying on top of that, it can be hard.

“I think it’s better that I keep the two aspects of myself separate from each other so I can use makeup as a break from my studies,” said Shahzad.

Law is generally a male-dominated field, while the makeup industry is more female-oriented. When asked how it feels to have two very gender-saturated fields of interest, Shahzad said she tries to avoid looking at it that way.

“If we view each as defined by gender then we tend to discredit the qualities that actually makes one successful and stand out in a respected field. Sure, I’m a woman pursuing a male-dominated career, but my gender isn’t representative of my capability of being successful– it’s the hard work and diligence that really matters at the end of the day.”

To see more of Shahzad’s looks or book her for your next big event, you can follow her on Instagram @laiqalooks.

On the Pre-Med Track

Meera Mathur is a fourth-year psychology student on the pre-med track who loves… performing stand-up comedy on the weekends?

“I honestly had never considered doing stand-up until Justin Baldoni came to OSU through OUAB; he told me that he thought I would be good at stand-up.”

It was a mix of her recognized talents and involvement in a student organization at Ohio State that got the ball rolling, not her major. While she may have a promising future telling jokes on stage, her heart is torn between the two passions.

“In high school, a lot of my peers struggled with mental health issues. I took AP Psychology my senior year of high school and realized I wanted to be a psychiatrist in order to help people who weren’t able to help themselves get better.”

“I honestly feel like comedy has taken over my heart ever since I started seriously considering it as a career. I love science so much, but I think I’ve always had to work really hard to grasp concepts. With comedy, the ideas just flow so easily, and it makes me think that I might be meant to pursue it instead.”

Mathur is grateful for her youth when it comes to feeling little pressure to make a decision right now, a kind of anxiety most students know all too well. Four years to decide one career track for the rest of your life? Students like Mathur say “pass.”

“I understand that it might be scary, but if you don’t try to make the most of what you’re passionate about, you’ll never know if something can come of it. I think the most important thing is to believe that you can make it. Your parents may not understand at first, but if you’re truly happy doing what you love, they’ll (hopefully) come around.”

To get a taste of Mathur’s funny bone and keep up with her performances, you can follow her on Twitter @brownannakendrick.