You may know that little shop between Bull’s and Midway: Pop’s Printed Apparel? It recently got the perfect upgrade with a refreshing twist.

Mid High Market, the brainchild of Austin Pence, reopened its doors on August 15. Although it was created by the Pop’s co-founder, it’s an entirely different concept than the custom t-shirt printing company.

“It’s an experience,” Pence says. “And that was really important to me when I designed the shop. We built everything in the shop, we designed everything from scratch. I wanted to take you back in time. I wanted it to make you feel like you were walking into the supermarket in the ‘60s and ‘70s. Part of Mid High Market is mid-century… It’s a step into the past, it’s gonna be unlike any other shop you’ve ever walked into.”

That’s undeniable. Mid High will certainly catch your eye on High Street with its bright orange interior, groovy patterns and interesting designs. Pence further describes the shop as uniquely itself and Instagram-worthy.

And you can! There’s a full length mirror out on the sales floor, perfect for a selfie break while shopping. Around the walls and at the entrance doors are Mid High produced t-shirts. At the checkout, you can browse through vintage High Times magazines.

Also, in the middle of the store is what Pence calls the ‘Local Produce’ section. The produce being the other two brands sold in store; t-shirts from Eleven Warriors and Ohio Allegiance. And although there are dozens of little oranges surrounding the merch, it’s just to seal in that supermarket vibe. The store’s specific supermarket aesthetic is what Pence hopes will bring people in, and bring them together.

“I thought the best place to do that is a supermarket, because a supermarket’s a place that everybody goes. It doesn’t matter if you’re a hippy or it doesn’t matter if you’re an accountant; you’ve gotta go buy groceries, you gotta get your produce somewhere. That was what Mid High Market was meant to do: bring people together, have them try new things, and have a good time.”

The Mid High ‘sportswear’ brand ranges in size from small to XXL and caters to Ohio State students, but invites older generations to come in and enjoy the experience as well. Just like the store itself, you’ll find that the clothing is influenced by the ‘60s and ‘70s as well.

Skyler Kitts, one of six designers on Mid High’s team, designs the clothing and manages the store. Going off of the ‘60s/’70s theme, a lot of the merchandise includes classic references like Sharon Tate. Pence considers the ‘60s to be “the mecca of design” and believes that Mid High’s modern cut shirts with vintage designs will differentiate the brand from a market that’s overwhelmingly saturated by the ‘90s nostalgia. The affinity to the ‘60s and ‘70s goes as deep as Pence creating the store’s playlist that revolves around classic rock and legends like The Beatles and Led Zeppelin.

“It’s a good opportunity to inform people, and also for me as a ‘90s baby, to learn more. The more I dig and the more I learn, the more I love. Because there’s so many things that were prevalent in the ‘60s and ‘70s that are the biggest things going on right now… plus, the music!”

All-in-all, Mid High is set to give customers a seamless shopping experience. Right now, Mid High hosts pop ups right outside its doors every Thursday, Friday, and home games throughout the rest of football season, hoping to pick back up in the spring.

In addition to this new brand, the Pop’s side of this business is still operating, just relocated to Clintonville now. So you can still have your custom t-shirt needs satisfied. Pop’s prints between eight and 10,000 shirts a month and it only takes between five to 10 business days to get your order. Pence and other co-founder Chad Campagna plan to continue serving the Columbus community and buying from local suppliers. • 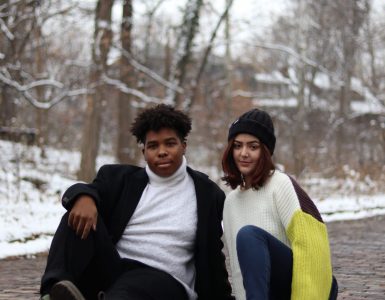 All the winter necessities you need this season Don’t let the cold hold you back from being your baddest self this winter. Ohio State still has nightlife to visit and events to attend, so make sure your closet is...