From the Underground: Kickflips and Useful Tips from OSU Skate Club

Those skaters by Orton Hall that left for a year while the Oval was under construction are part of a club…and they’re BACK, BABY!

If you were near Orton Hall this summer, it’s likely you saw a dozen or so rascals decked out in Vans or Chucks, jeans, and a thick layer of sweat flipping and ollying on and off the pavement, curbs, and bench (which they totally didn’t break, btw).

These skateboarders comprise some of OSU’s Skate Club and they were kind enough to sit down with me in between all the scrapes and falls to give 2019’s freshmen some crucial info about OSU, Columbus, and the sk8ing life.

One elephant you may have noticed is that OSU’s campus is massive, a totally different beast than your high school’s quad. Luckily, students have numerous ways to traverse campus and its surrounding areas. You can walk, of course, but you can also bike, skate, scooter, drive if you’re not a freshman (sorry freshmen), or, since you’re a student, you can also travel for free on buses using the university’s CABS transit service.

Jason Black, a co-founder of the Skate Club in 2014, had nothing but praise for Columbus and the university’s traveling accommodations.

“I feel like they cater towards alternate methods of transportation,” he said. “They repaved Summit and made a whole bike lane, High Street has a bike lane, Arcadia just got redone and has two bike lanes on the sides. Stu like that is really convenient ‘cause skaters or longboarders are allowed to use those too.”

“It usually takes me a nice 15 minutes to walk to class. [Skateboarding] shortens it down to a five-to-seven minute commute.” He added, “Especially if you live east of campus, you just go downhill the whole way. You barely even have to push if you live on Summit.”

You’ll soon experience–if you haven’t already–some places are persona non grata when it comes to non-walkers. Kohler described the pitiful state of older roads on and near campus. He mentioned ones on South Campus in general and North Campus up to Oakland and towards Neil. They have tons of potholes, rocks, and loose pebbles that can cause serious injury for the unattentive rider. So be careful. Regarding prohibited areas, Black said people often ride through the Oval, which isn’t allowed, but there isn’t much enforcement to deter them. Otherwise, areas which people use to travel are fair game.

Great, you know where to go and not go, and you’ve decided walking’s for suckers, but what about how you should go about going? Skate Club’s got you covered.

“Learn the topography,” Kohler stressed. “Hills are your friends… sometimes.”

He stressed you have to obey the rules of the road just like drivers, and he recounted a recent incident where a professional skateboarder died trying to bomb down a hill as a cautionary tale.

Black added, “[Have] respect for people walking and cars. Maybe you’re gonna skate some of the way to class, then walk ‘cause

there’s a ton of people going their own way.” Lance Porter, a “disciple” of Black’s, contributed a few key tips that’ll save your skin: “Hand signals are good. [And] if you’re coming up on someone, yell.” Also: “Be careful with dogs.” Everyone in the club agreed that was gospel.

Many of you may be interested in skating or already skate, and if you fall into either category, the club has a number of faux pas to avoid, lest you reveal you are indeed a freshman or novice skater, neither of which you want to be known as.

Kohler suggested you work on your form (something the club can help you with): body language on the board, how you push, balance, and maneuver around obstacles. Black said it’s important to have realistic expectations about improving on the skateboard.

With the involvement fair, the club will sign up between 150 and 200 people per year, and a lot of them assume skateboarding is very user-friendly and they’ll learn tricks in no time. They have to explain it will take months and months of dedication to conquer even beginner tricks. Most sign-ups don’t show up to the meetings, unsurprisingly.

Porter added you shouldn’t try to impress the fairer sex with tricks; not only is it obnoxious and gives skaters a bad name, but it could be dangerous, too, if you screw up and the board hits someone. Additionally, the club couldn’t emphasize enough to not skate in the rain. It ruins the bearings, the board, and all the street gunk conglomerates under the board.

Concerning streets v. sidewalks, what’s the rule of thumb for riders? The group consensus was to stay on the street for the most part, unless the sidewalks are wide or empty enough to comfortably ride without getting in anyone’s way. And when in the street, make sure to go in the direction of traffic when riding, be vigilant of other vehicles, and try your best to make yourself known: movement is a good way to get someone’s attention; wearing bright clothing; using hand signals to indicate which way you’re headed; etc.

In their closing remarks, the club wanted to relay their support for joining student organizations at OSU. During Welcome Week, you’ll discover there are over 1,300 registered student organizations on campus, and each one offers the opportunity for you to meet new people and have fun in between the mountains of homework and freshman- 15-liable eating binges.

Porter summed it up best: “Even if you’re slightly interested, go and take that risk, ‘cause you never know.” 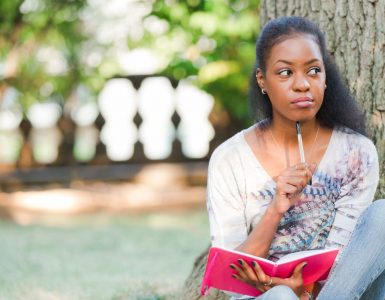