Doctor Sleep review! (And a drinking game to pair with your redrum)

Picture This: NEW HAMPSHIRE. ALCOHOLISM. GHOSTS. MURDER. All of this awaits you in Mike Flanagan’s adaptation of Stephen King’s Doctor Sleep.  I had the chance to go to an early screening of the movie at Gateway. I’m not trying to say that I have the best job on planet Earth, but I have the best job on planet Earth. Doctor Sleep is the sequel to The Shining. If you need a quick recap of The Shining, then we may need to get some things squared away.

I’m an English major focusing on film with a specialization on adaptation. In other words, you’re going to need to forgive me while I get a bit nerdy. The Shining is a horror novel written by Stephen King. It tells the story of Jack Torrance, his wife Wendy, and their five-year-old son, Danny. Jack Torrance gets the position of winter caretaker at the Overlook Hotel. We quickly find out that Jack Torrance struggles with anger management and alcoholism. I won’t get too much into details, but Danny discovers that he has telepathic powers. In the story, this is called the “shine.” We also learn that the Overlook is severely haunted and looking for people to possess and… basically, chaos ensues.

So, The Shining was adapted in 1980 by Stanley Kubrick, whose work you may be familiar with if you’ve ever watched 2001: A Space Odyssey or A Clockwork Orange. Stanley Kubrick is what’s called an auteur. In film studies, auteurs are essentially directors or artists that have defined aesthetic, themes, or style. So, for example, Alfred Hitchcock’s movies all have certain elements: a blonde bombshell female character, they’re usually thrillers, and they almost always have twist endings. Another example of an auteur would be Wes Anderson. His style would be best defined through his particular use of colors and dialogue. So, Kubrick’s style is very particular. He uses vibrant colors, he likes anti-heroes. His adaptation of The Shining is a cult film. Even if you haven’t seen it, you’ve probably heard someone say the famous line, “Here’s Johnny!” or seen Jack Nicholson’s deranged face coming through a crack in a door, with a woman crying while holding a knife on the other side of the door.

Interestingly, Stephen King famously despised Kubrick’s adaptation. I’m telling you all of this to explain that Mike Flanagan had two obstacles that he had to balance when filming Doctor Sleep: he had to balance the fame and influence of Kubrick’s film, while following the story of King’s novel. Not to mention that Flanagan had to be careful to not emulate Kubrick’s aesthetic too much and risk not developing his own individual style. And honestly? Flanagan did a wonderful job.

Without spoiling too much of the film, in Doctor Sleep we begin where we left off in The Shining. A young Danny and Wendy are trying to adjust to life back in their home, and Danny is trying to come to terms with his new abilities, of which he’s incredibly afraid and by which he is traumatized. We cut to an older Danny, played by the beautiful Ewan McGregor, who, like his father, is struggling with alcoholism. At the same time, there’s a group of creatures that look human, who feed on the “shine” which looks like steam and can be extracted from a body through pain and fear. One of the leaders of the creatures is Rose the Hat, played by Rebecca Ferguson, who single-handedly proves that there’s nothing scarier than a white woman with dreadlocks.

Doctor Sleep kept me at the edge of my seat. The scenes where we can see the “shine” in full effect are breathtaking. The characters were strong and well developed, especially Kyliegh Curran’s Abra Stone. Without going into too much detail, any scene where Flanagan had to revisit the events of the Overlook were done masterfully. The film beautifully bridged the gap between Kubrick’s film and King’s story. So much so that I didn’t even have to do the Stephen King drinking game (more on that in a bit). If you’re a fantasy horror fan, I highly recommend Doctor Sleep. I give it a B.

So, if you’re familiar at all with Stephen King’s work, you’ll recognize certain elements in his films. King fans have developed a drinking game to perform while watching an adaptation of King’s novels. I took the liberty of developing a version of the drinking game for Doctor Sleep. Enjoy! (Gateway Film Center has a bar for you!) 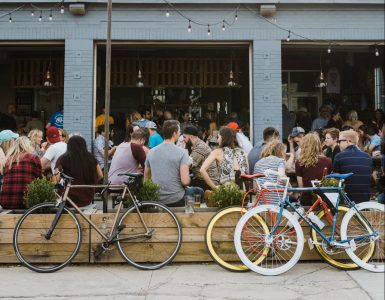